Lots were laid out for the Cutchogue division of land between the original settlers in 1667, making it what Southold Town’s first historian, African-American Wayland Jefferson, called “Southold’s first colony.”

The hamlet took its name from the Corchaug Indians who were living on what is now called the North Fork at the time of Southold’s founding in 1640. Corchaug meant “principal place” in the Indians’ language. 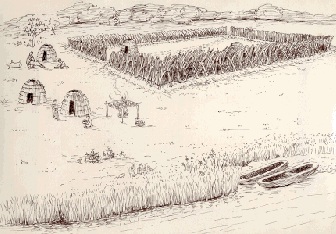 Perhaps the principal place to which the Corchaugs were referring was the ancient Native American palisade fortification we know as Fort Corchaug.

Three other families of Indians existed on eastern Long Island and each of the four groups had a fort at which the chiefs (related to each other by blood) could communicate by sending smoke signals.

Today there is no trace of the three other forts. Archeologist Ralph Solecki, who first brought the Fort Corchaug site to public attention, called it “without peer on the whole Atlantic seaboard.”
The rendition of Fort Corchaug, which is on The National Register of Historic Places, was done by artist Theresa Shaw. Note the typical beehive-shaped huts used by the Corchaugs.

In July of 1997, after decades of effort, state, county, and town officials together with the Peconic Land Trust worked out an arrangement for over one million dollars that preserves the Fort Corchaug site.

Other points of historical interest are the green at Case’s Lane and Route 25 with the oldest English-style house in New York State built in 1649, the Wickham farmhouse, circa 1740; the old Schoolhouse Museum; and the Cutchogue Library, part of which was built in 1862 as a congregational church.

The John Budd House was built in Southold by John Budd in 1649. He gave it to his daughter Anna when she married Benjamin Horton. It was moved to Cutchogue in 1661 and is official designated a national historic landmark. (Photo courtesy of Mr. Ralph Pugliese Jr.)
Agendas & Minutes
Departments & Committees
Town Code